c and c plus plus programming projects

c and c plus plus programming projects

The origin of C++ dates back to 1979 when Bjarne Stroustrup, also an employee of Bell AT &T, started working on language C with classes. He borrowed desirable features from many other languages like Simula, Ada, ML, CLU and ALGOL 68.  Thus, in addition to features of C language, C++ also included classes, strong type checking, default function argument and basic inheritance.  Till 1983, it was called C with classes, and in 1983 it was named C++. During 1998, a joint ANSI-ISO committee released the specification for C++ language standards.

In mid-2011, C++11, a new C++ standard was released. It was considerably influenced from the Boost library project and many of the new modules were sourced directly from the corresponding Boost libraries. It also added other new features including  a comprehensive randomization library, regular expression support , a new C++ time library, a standard threading library, atomics support, auto keyword, improved support for unions and array-initialization lists, new templates and container classes. C++14, released in December 2014, included smaller improvements and bug fixes over C++11.

Software development in C and C++ continues to offer benefits for enterprises around the world, based on their business objectives. As updating of the languages continues, the range of applications that these languages can create is likely to grow as well.

1 review for c and c plus plus programming projects 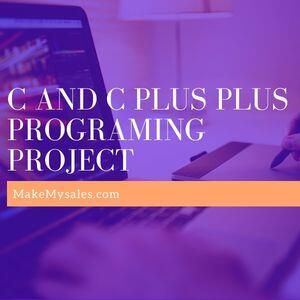 c and c plus plus programming projects
₹6,300
Scroll to Top
error: Alert: Content is protected !!